What are chelates, and why do we need them?

What the heck are chelates, why do we need them, and how do they work?

Well most micronutrients (Fe, Mn, Zn, Cu) are hard to get into the plant! Unfortunately, they combine easily with many alkali ions (phosphates, OH ions) in our soil solution or even irrigation water. They precipitate (form solids) thus becoming unavailable to the plant. They do demineralize over time because of microbial activity and organic acids in the soil, however, the demineralization is often too slow to provide these micronutrients at the correct time, and in the quantities necessary to provide maximum growth.

Good thing we have chelates! The easiest way to think of chelating agents is to think of them as a protective coating or encapsulating agent. They basically surround the metal ion and prevent it from chemically bonding and forming precipitates. In this protected state, the chelated metal is then readily available for absorption into the roots or foliage of plants. When the chelated metal is absorbed by roots or foliage the whole complex molecule is metabolized. The metal ion is released and the chelating agent is also metabolized by the cell.

One of the common ag chelates is derived as a byproduct of paper production. Wood pulp is soaked in sulfuric acid to break down the fibers. At the end of the process there is a remaining liquor of Lignin molecules from the wood and spent sulfuric acid. It is most often referred to as Lignosulfonate. It is fairly effective, safe, and relatively inexpensive. Another advantage is that it seems to chelate a wide range of cations. The chelated metal concentrations are usually limited to about 10%. Diagram of a chelated calcium ion: 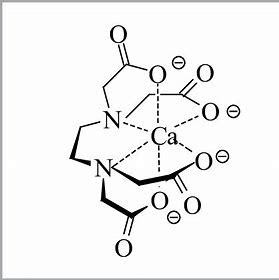 Amino acids also serve as an excellent, albeit more expensive, chelating agent.  When correctly produced, they not only efficiently deliver the chelated nutrient, but stimulate growth as they are quickly metabolized into many important metabolic pathways!

There is also one chelating agent I try to stay away from…EDTA.

A synthetic molecule (big and ugly) that was developed years ago and is unfortunately sometimes used as a food addative. The problem with EDTA is that it releases one metal ion but then quickly takes another! So let’s say you are taking a iron chelate…well the iron will be delivered but the EDTA then picks up a calcium or zinc ion! There is no way to control which element will be removed…as long as it has affinity for EDTA, it’s susceptable! Because EDTA is a big synthetic molecule, it does not easily break down and can persist in the environment for quite some time!

There are a number of organic acids that can serve as chelating agents but I believe we have covered the main ones here!  A search of “chelating agents” will no doubt reveal more!